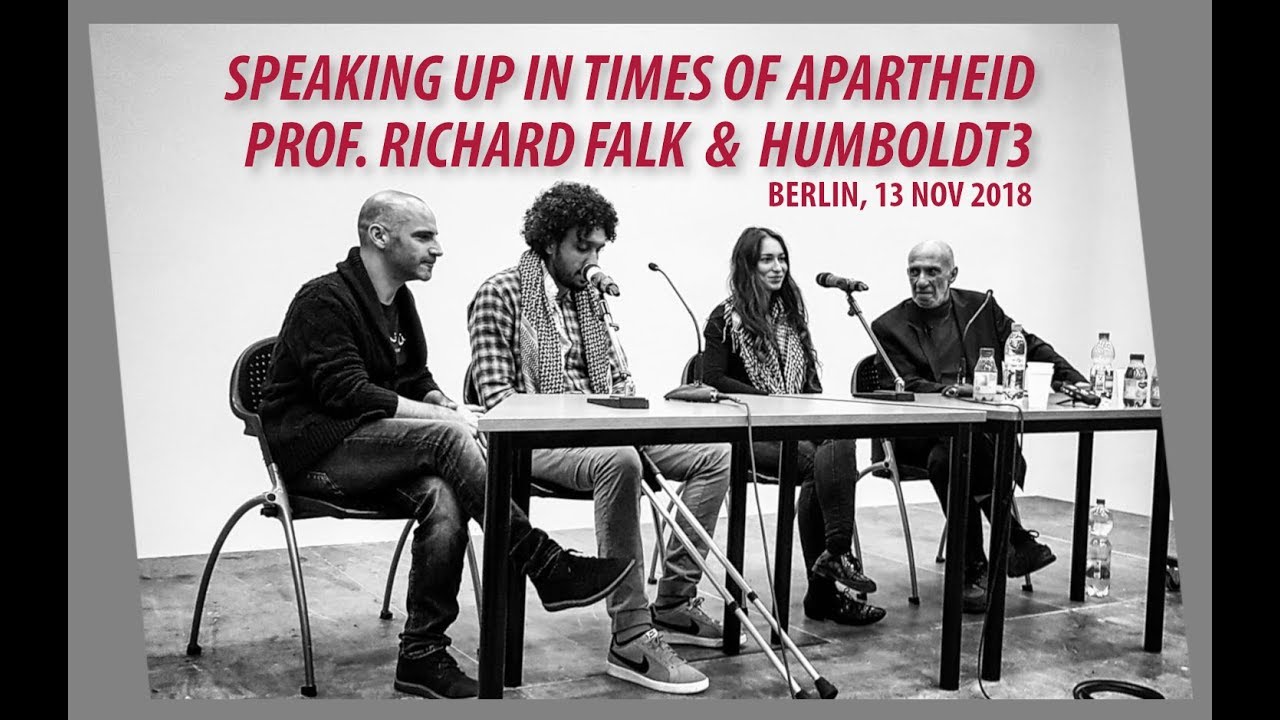 Speaking Up in Times of Apartheid, with Prof. Richard Falk and the Humboldt3. This is a 10-minute excerpt from an event which was held in Berlin in Nov. 2018, ahead of their upcoming trial in Berlin on March 4th, 2019, for standing up to Israeli crimes against humanity.
❀❀❀

UN ESCWA report ❀ “Israeli Practices towards the Palestinian
People and the Question of Apartheid”
http://bit.ly/apartheid_ESCWA

Humboldt3 ❀ “Speaking Up in Times of Apartheid”
https://mondoweiss.net/2017/07/speaking-apartheid-berlin/

The #Humboldt3 host Prof. Richard Falk – world-renowned legal scholar, Princeton University professor, and co-author of the UN report on Israeli #apartheid – for a discussion on Israeli crimes against humanity and the legal-moral imperative to oppose it.

Prof. Falk endorses the Humboldt3 who will be facing trial in Berlin in March 2019 for peacefully protesting Israeli parliament member Aliza Lavie’s talk at Humboldt University. The three human rights activists – two Israeli-Jewish citizens and a Palestinian from the open-air prison of Gaza – confronted Lavie for her role as a representative of a criminal apartheid regime and her personal responsibility for the 2014 war on Gaza.

Following the protest, a media frenzy ensued which involved slander and false accusations against the activists. The Berlin Intelligence Agency reproduced the fictitious narrative and now they are facing trial for two counts of criminal offense. While the German prosecution is interested in criminalizing their dissenting voices, the three will be taking on the State of Israel in front of the German courts.

Yours,
Stavit, Majed and Ronnie

“We will not be silent. We are your bad conscience.”