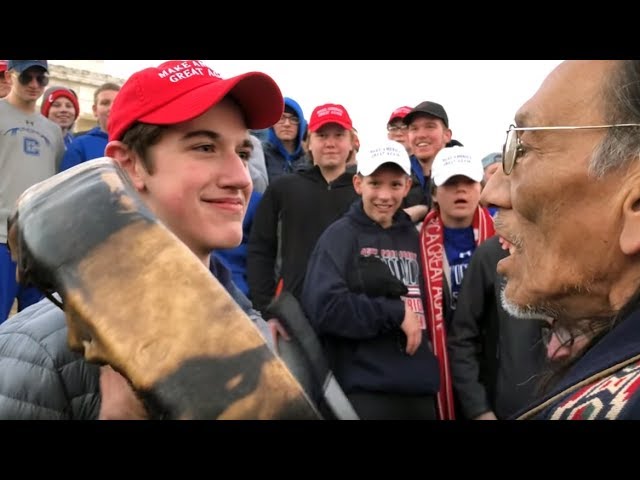 A group of high school teens surrounded and jeered at Native American elder Nathan Phillips on the steps of the Lincoln Memorial on Jan. 18.

Surrounding him are a throng of young, mostly white teenage boys, several wearing “Make America Great Again” caps, with one standing about a foot from the drummer’s face also wearing a relentless smirk.

Nathan Phillips, a veteran in the indigenous rights movement, was that man in the middle.

In an interview Saturday, Phillips, 64, said he felt threatened by the teens and that they suddenly swarmed around him as he and other activists were wrapping up the march and preparing to leave.

“It was getting ugly, and I was thinking: ‘I’ve got to find myself an exit out of this situation and finish my song at the Lincoln Memorial,’ ” Phillips recalled. “I started going that way, and that guy in the hat stood in my way and we were at an impasse. He just blocked my way and wouldn’t allow me to retreat.”

So, he kept drumming and singing, thinking about his wife, Soshana, who died of bone marrow cancer nearly four years ago, and the various threats that face indigenous communities around the world, he said.

In 2015, Phillips was verbally attacked by a group of Eastern Michigan University students who were dressed as Native Americans during a theme party near the town of Ypsilanti, according to news reports.

Phillips had approached the group, informing them that their celebration was racially offensive, a local Fox News station reported. One of the students threw a beer can at him, Phillips told the news outlet.