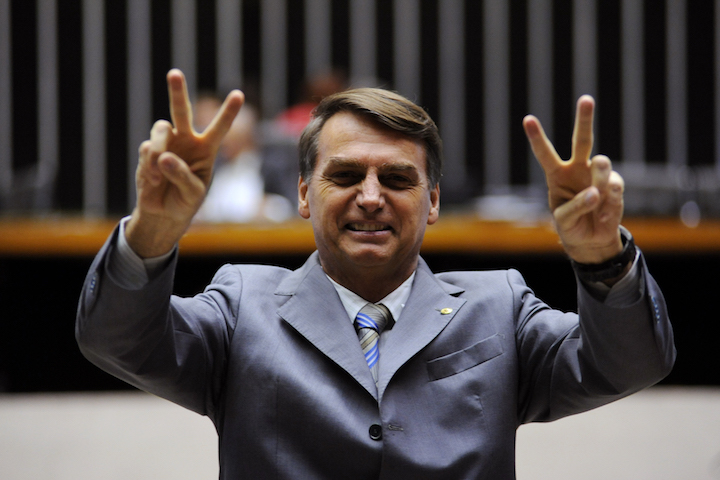 The warm relations between Israel and a new crop of anti-democratic leaders are tragic, but they also expose the true nature of Israelâ€™s relationship to the Palestinians.

Only hours after Jair BolsonaroÂ was elected president of Brazil last Monday, Prime Minister Benjamin Netanyahu decided toÂ phone the extreme-right candidate. Netanyahu accepted Bolsonaroâ€™s invitation to Brazil, inviting the president-elect to Jerusalem,, after the latterÂ declared his intention to move the Brazilian embassy to Jerusalem.

Bolsonaro is a vulgar and violent man. His aggressiveÂ remarks leave no doubtÂ regarding the kind of policiesÂ he plans on enacting. He also wholeheartedly supports Israel and its actions, whichÂ is hardly a surprise.Â WithÂ Trump, Orban, Modi, Duterte and others, it has becomeÂ self-evident that far-right leaders will immediatelyÂ side with Israel, to which the Jewish state responds with a reciprocal warm embrace. There are few who are still embarrassed by this show, but in Israel, NetanyahuÂ has beenÂ able to celebrateÂ these victories as if he himself were kingmaker.

The more Israel becomesÂ excited byÂ these leaders, seemingly vestiges of centuries passed, whoÂ were elected with the help of Vladimir Putin, the more theyÂ feel it necessary toÂ ignoreÂ Palestinian suffering and pledge support forÂ continuedÂ occupation. The more right-wing commentatorsÂ spout theÂ mainÂ argument of the Right today, the more their opponents understand the extent to which the Israeli government and the occupation need both racism andÂ regressive ideasÂ to exist.

The congruence between the violence and the hate that these officials spread, and their complete, unquestioned support for Israel is astounding. It is doubtful whether there is anything that proves the irrelevance of all kinds of â€œliberalâ€� justifications for the settlement enterprise and the occupations quite like the support of right-wing authoritarians. The world now sees who vouches for Israel â€” the only thing left to do is draw a line in the sand. 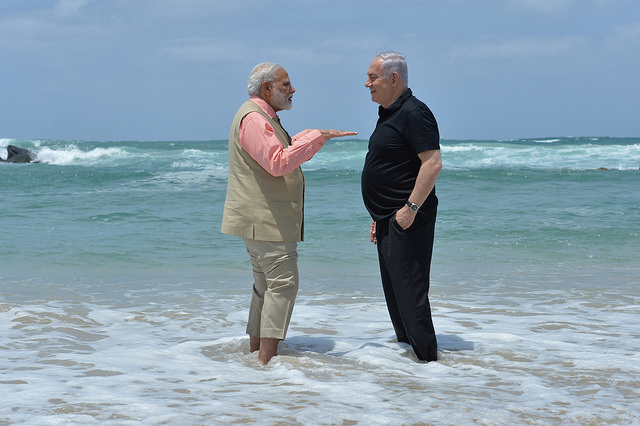 And yet the Foreign Ministry, the hasbara industry, the Jewish Agency, Birthright â€” they are all busy figuring out how to market this package. Netanyahu, of course, heads this industry, and each appearance on the world stage proves what his rivals have always claimed about him.Â Yet the occupation has long ago become Israelâ€™s official policy.

This much is clear to all those who oppose this new wave of elected official, and it is good news for Palestinians and activists who for decades have tried to convince Western leaders that the occupation and the settlements areÂ littler more than theft and dispossession. That there is no connection between the occupation and the Holocaust or Israelâ€™s security. Now it is clear thatÂ Israel is acting only to entrench military rule in the occupied territories, that this is the only obstacle to peace and to the end of the conflict. Today dissidents of all stripes are learning this truth, ironically thanks to Israeli funding.

There areÂ people in Israel who believe that before Trump, the United States opposed the occupation. Those who know the detailsÂ are awareÂ that this is a joke. Trump is not a much bigger supporter of the occupation than Barack Obama or Bill Clinton, and the same goes for the rest of the leaders of the West. Some of them may have supported peace negotiations, whileÂ othersÂ have not, but backing for Israelâ€™s policies was and remains near total. Israel has always enjoyed being part of the family of nations, economically, politically, or even morally.

Israelâ€™s decision to peg its foreign policy to far-right authoritarians is a poor one, characterizing the paranoid and anxiety-driven era of Benjamin Netanyahu. But it is not the entire story: Trump, Orban, Modi, Duterte, and now Bolsonaro have happily jumped on the bandwagon. They are taking advantage of Israelâ€™s liberal credit around the world in order to bolster themselves. In effect, they end up undercutting that very liberal credit.

The fact that these people are being elected is terrifying, both for their citizens as well as for the world. The same goes for the fact that they choose to support Israeli policies, and that Israel chooses to praise them and offer its support in return. But the Bolsonaros of the world have also left us with a worthy mission. On the day they are tossed into the dustbin of history, the struggle against the occupation, for the end of the conflict, and for peace, can find itself stronger and more stable, with many new partners who for years have gone along with Israelâ€™s every whim.

Opponents of the occupation must now pick up the leftovers. There is no doubt that they must also contend with the new regimes, as awful as they may be, just as they must contend with Israel, the IDF, the Civil Administration, the courts, and the police. But the new leaders have also provided us with a huge liberal camp with which we must form alliances. We must teach it about what is happening on the other side of the Green Line, and then we must fight together.

Eli Bitan is a blogger for Local Call, where this article was first published in Hebrew. Read it here.

The post The rise of the global far-right could energize the anti-occupation movement appeared first on +972 Magazine.

The warm relations between Israel and a new crop of anti-democratic leaders are tragic, but they also expose the true nature of Israelâ€™s relationship to the Palestinians. By Eli Bitan Only hours after Jair BolsonaroÂ was elected president of Brazil last Monday, Prime Minister Benjamin Netanyahu decided toÂ phone the extreme-right candidate. Netanyahu accepted Bolsonaroâ€™s invitation to […]

The post The rise of the global far-right could energize the anti-occupation movement appeared first on +972 Magazine.