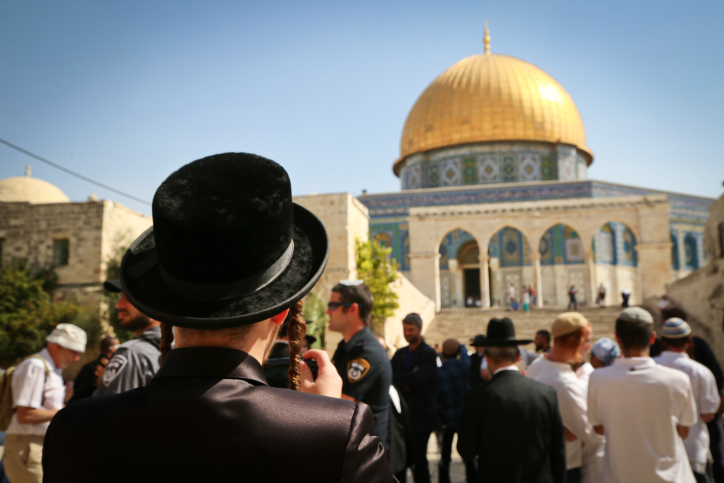 Tisha Bâ€™Av and the mainstreaming of the Temple discourse

The further Israel moves from a solution to the conflict, the more it finds itself in need of the symbols of the religious right.Â As long asÂ liberal Israelis do not fully renounce the sanctification of blood and land, they will be unable to present a real alternative. Â

Israeli Jews visit the Temple Mount compound, site of the Al Aqsa Mosque and the Dome of the Rock in Jerusalem Old City, during the Jewish holiday of Sukkot, October 8, 2017. (Yaakov Lederman/Flash90)

I have not adhered to halakha in my daily life for years now, but in spite of this I do fast on Tisha Bâ€™Av. I am often asked if I am mourning the destruction of the Temple and the answer is both yes and no.

Yes, I identify with the historic Jewish consciousness of destruction, exile and catastrophe that are associated with this date. No, I do not hope for the building of a third Temple. The Temple sacrificial ritual and the Cohanim autocracy, subject to sharp internal criticism prior to the destruction of the Temple, gave way to the Talmudic give-and-take which valued the multiplicity of opinions and debate.

Even if the Romans had not destroyed the Temple, Judaism would have eventually abandoned it, and if not, God forbid, Jewish culture would have atrophied. A number of anti-Temple sects had already developed prior to the destruction, one of which was to become the largest religion in the world. However, due to the catastrophe of its destruction, the Temple became the locus of future redemption.

Post-Temple Judaism managed, for the most part, to embrace the tension between the longing for the Temple as a utopian symbol, and the solid foundations of halakha, moral teachings and interpretations grounded in everyday life. However, there were also periods of messianic foment and attempts to speed up the redemption, almost all of which came to disastrous ends.

Zionism was a daring attempt to harness the messianic tension for social-political action in â€”Â and not outside of â€” history. From the outset this involved walking a thin line because, as Gershom Scholem and others stated, the land of the Bible, its landscapes and language, were largely inseparable from the loaded values and symbolic images with which they were imbued.

The more Zionism invested in denying the existence and presence of the Arab inhabitants of the land, and later in maintaining the occupation, the more it needed the array of sanctified justifications that seemingly granted it exclusive ownership of the land. Thus, the Temple reappeared and took up its place as a foundational Zionist symbol.

It would be a mistake to attribute the Templeâ€™s hold on mainstream Israeli discourse to esoteric messianic movements, even if such movements are indeed leading this discourse. While these movements are now well-connected to the establishment, enjoying its sweeping support, the central political streams in Israel, even those supposedly opposed to the government, do not come out against the dominance of the Temple discourse and its representatives because they no longer dare to propose a real alternative to nationalistic doctrine and the occupation that nourishes this discourse.

Even the Reform and Conservative movements have abandoned their historical anti-Temple stance in favor of a physical and symbolic foothold in Temple surroundings. And it no accident that their struggle has garnered implicit, and at times even explicit, support from the Temple movement. 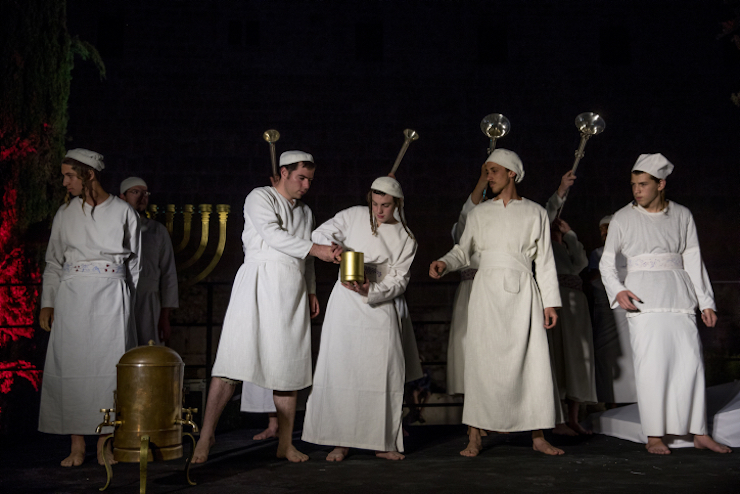 Israel is at a dangerous crossroads. Many sectors within it have already chosen, some actively and others passively, the paradigm of the Temple. It has been embedded in the political realm and is now penetrating daily discourse, school curricula and all spheres of Israeli existence.

The further Israel moves from a just and sustainable solution to the Israeli-Palestinian conflict, the more it finds itself in need of the imaginary and symbols of the religious right and the Temple movements while rejecting any other narrative.

Israelâ€™s liberal sectors are still conducting rearguard battles, such as the LGBTQ struggle. In practice, they have come to terms with their place on the margins of Israeli discourse and with the development of a religious autocracy. As long as the liberal sectors do not fully renounce the sanctification of blood and land, they will be unable to present a real alternative.

Historic Judaism throughout the generations internalized the dangerous affinity between destruction and redemption. It transferred the consciousness of the Temple to the â€œminor temples,â€� i.e, synagogues, in which the theological ability to absorb deficiency and imperfection produced its greatest spiritual creations, even in periods of suffering and distress.

For the first time in Jewish history, the situation of Jews throughout the world is much better than that of many other peoples. The great challenge of contemporary Judaism is to create a paradigm that sanctifies the spirit over the material, even in an era of sovereignty and power, and which is able to absorb deficiency, multiplicity and otherness while providing a place for the narratives and suffering of others. Until we are there, and even after, there exists a good reason to fast on Tisha Bâ€™Av.

Yudith Oppenheimer is the executive director of Ir Amim. This article was first published in Hebrew on Local Call. Read itÂ here.

The further Israel moves from a solution to the conflict, the more it finds itself in need of the symbols of the religious right.Â As long asÂ liberal Israelis do not fully renounce the sanctification of blood and land, they will be unable to present a real alternative. Â  By Yudith Oppenheimer I have not adhered to […]