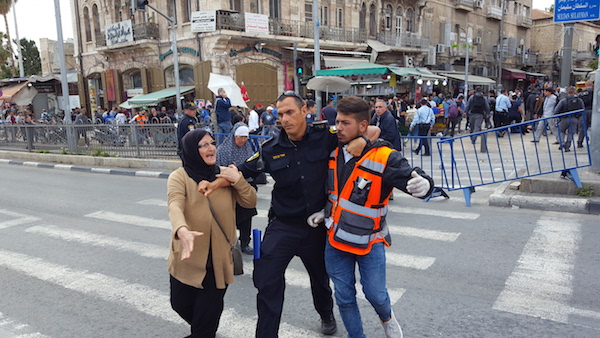 Bearing witness to the routine violence of occupation

In East Jerusalem and the West Bank, Palestinians have virtually no civil rights. What rights they do have can be revoked at a moment’s notice.

Israeli police arrest a Palestinian Red Crescent medic as a woman pleads with the officer, ‘That’s my son!’ (Sasha Belenkiy)

Even when the cameras of the big international news agencies disappear, the occupation grinds on. One day in the West Bank and East Jerusalem demonstrates how precarious Palestinians’ physical safety and rights are under Israeli military rule.

On May 13 — Jerusalem Day and the day before the U.S. Embassy move — we documented Israeli forces violating the rights of Palestinian civilians and their allies, first in the West Bank village of Turmus Aya, then in East Jerusalem.

In 2006, Rabbis for Human Rights, successfully petitioned the Israeli High Court to compel the military to escort Palestinians into agricultural areas in the West Bank. Twelve years later, we went with Rabbi Arik Ascherman, formerly of Rabbis for Human Rights and now director of Torat Tzedek, to Turmus Aya to accompany farmers as they planted olive trees on their private land. When we arrived that morning, the border police were already there — as were young settlers, periodically running into the field and uprooting trees. Ascherman approached an officer who confirmed that the army intended to fulfill its legal obligation to protect the Palestinian farms. For a while, it did.

After the second or third raid by the settlers, however, the Israeli soldiers apparently decided it was too much trouble. They forced all of the Palestinians and those there to help them out of the fields. They did not present a military order for the expulsion and refused to explain their decision — despite several explicit requests for information. The expulsion was most likely illegal; it is rarely permissible for the military to close an area without an order and it is forbidden to deny access to an area unless it is closed. When nearly all of the Palestinians had left, a soldier, his commanding officer present, fired tear gas at the remaining Palestinians and international activists.

Later in the day, we witnessed similar abuses and even worse police brutality just outside Jerusalem’s Old City. May 13 was Jerusalem Day, an Israeli national holiday celebrating the “reunification” of Jerusalem in 1967. Tens of thousands of religious-nationalist Jewish Israelis paraded from West Jerusalem to the Western Wall, passing through Palestinian East Jerusalem and the Muslim Quarter of the Old City on their way. The parade, known as the March of Flags, is often marked by racist and ultra-nationalist violence. Inside the Muslim Quarter marchers regularly vandalize Palestinian shops, bang on the doors of residents’ homes, and chant anti-Arab and anti-Muslim slogans during the march. 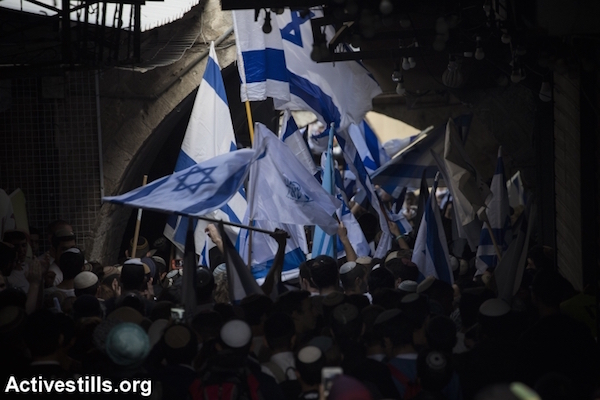 Palestinian solidarity activists have responded in recent years by shopping in the Muslim Quarter earlier in the day to make up for the loss of business that the Palestinian shop owners face during the march. In previous years, the police have ordered Palestinian storefronts in the Old City to close. This year, the police did not issue a similar order, but many stores still closed to avoid the violence.

Israeli and international solidarity activists were present during the march to encourage the police to protect the city’s Palestinian residents.

When we arrived in East Jerusalem that day, heavily armed riot police had begun to “sterilize” the area around Damascus Gate, which leads to the Old City, closing the entrances to the gate and forcing those standing in front of the gate either inside the Old City walls or up to the street. Those who arrived later — many carrying children or groceries — were denied access to their homes for several hours.

After the police pushed us away from Damascus Gate, we positioned ourselves among a group of roughly 40 protesters near one of East Jerusalem’s main bus depots. There was considerable space between the crowd gathering at the bus depot and the march. Demonstrators were peaceful. Among this small group of Palestinians, the most inflammatory action was one man yelling from afar at the religious-nationalist marchers: “You are sick! You bitches!” The police quickly pulled him back from the fence by the street and forced him behind a police barricade several meters back.

Just after 5 p.m., two officers appeared to plot and then carry out an attack on the peaceful demonstrators. There was no provocation for the attack. During the assault, a police officer deliberately pushed one of us over a barricade and down some stairs. In a separate video, another soldier can be seen striking a restrained Palestinian man several times with his assault rifle.

Twenty minutes later, police pushed the Palestinian demonstrators further back. At first, they used minimal force, shoving people, including women and children. But the police quickly escalated, punching and kicking, with one officer aiming his fists for a Palestinian man’s head. In a second wave, the police continued the violent assault. An Israeli activist approached the commotion, only to be sucker punched and then arrested (he was later released).

The gathering of people by the East Jerusalem bus depot should not have required a permit under Israeli law. In Israel, a demonstration needs a police permit only it meets the following three conditions: the demonstration contains over 50 people, takes place outdoors, and includes political statements or speeches, with the clarification that shouting slogans does not constitute a political statement.

This one day in May made clear the fundamental inequality in Israel-Palestine. Jews have robust civil rights — in many instances, even their hate speech is police-protected. Palestinians, in contrast have either no civil rights or, if they are citizens, their de jure rights can be revoked at a moment’s notice.

Zak Witus and Sasha Belenkiy are current participants in Achvat Amim (Solidarity of Nations). Zak works at Tent of Nations as a farmhand and at the Palestine-Israel Journal writing and editing. Sasha volunteers with Torat Tzedek, accompanying Palestinian shepherds in Area C. Both are currently based in Jerusalem.

In East Jerusalem and the West Bank, Palestinians have virtually no civil rights. What rights they do have can be revoked at a moment’s notice. By Zak Witus and Sasha Belenkiy Even when the cameras of the big international news agencies disappear, the occupation grinds on. One day in the West Bank and East Jerusalem […]